“I have this real hatred of autobiographical fashion,” says Edward Crutchley, perched on a sofa in his pristine apartment inside London’s Barbican estate. “The idea that you can only work around your lived experience, it really irks me.” The designer’s vision for his namesake label stretches far beyond mundanity of the day to day; serving as a cultural conversation that pivots traditional dress through a deeply innovative lens. His clothes come armoured in artisanal textiles and rich prints, with Crutchley’s eye for cut and silhouette positioning his brand as one of the most versatile showing in London today.

Crutchley is a walking balancing act. Alongside operating his namesake label out of the capital, the designer has pitched up in Paris, where he has worked as Dior Men’s director of fabrics and graphics since Kim Jones arrived at the storied house in 2018. “Everything happens at the same time,” he says, “I have work streams in my head and one will pop up and then the other will pop up. It’s just down to organisation.”

The designer has never crafted a collection without simultaneously working at another juggernaut brand. When he launched his label in 2015, under Lulu Kennedy’s Fashion East, he was consulting for Louis Vuitton under Jones.

“Kim is very supportive,” says Crutchley. “If I want to ask his opinion or show him things, he’s totally open. We work together all the time, it’s a very easy relationship.”

Since we’ve started to emerge out of the pandemic, Crutchley’s collections have become grittier, steeped in sex appeal. On the catwalk, he has been able to collide 18th-century silhouettes with club kid aesthetics, best demonstrated via his AW22 collection, which queered the codes of goth.

“When I was coming out of that last show [SS22], I was thinking about the little darkness that was floating around under that collection. I was on the way home in the taxi afterwards and I had the idea that it could be good to do something goth; where the crossover between gothic and queer is.”

In his show notes, Crutchley penned a reading list of 20 books which helped guide his design hand, including The Queer Uncanny: New Perspectives on the Gothic by Paulina Palmer and Gothic Queer Culture: Marginalized Communities and the Ghosts of Insidious Trauma by Laura Westengard.

Models, towering high in embellished, upcycled leather platforms made in collaboration with Roker, emerged on the catwalk as if they were stalking the dance floor of legendary north London goth club Slimelight, clad in crushed-velvet prom dresses and bomber jackets with ’80s shoulders, as well as moth-eaten bodycon frocks and ass-flashing, barely-there leotards.

“It was a very conscious decision to have a lot less print and pattern this season,” adds Crutchley. “I think it’s very easy for people when they’re writing reviews to pigeonhole what you do. Yes, there are the prints and the textiles, but there is more going on here. I do think about shapes, I do think about what I’m saying through the silhouette. So, yes, it was very deliberate to do these much starker, plainer pieces.”

The looks came paired with nipple clamps transformed into earrings, as well as smashed-up tiaras, created by esteemed milliner Stephen Jones. “We work together very closely,” says Crutchley. Jones is also a key pillar to Dior’s atelier. “ Stephen’s great because he knows everything. You can give out some vaguely thought-through reference and he’s like, ‘Oh, here’s 16 examples of what it could be.’”

Crutchley’s brand is indebted to British craft. The designer has long turned to mills up in Yorkshire, alongside collaborators dotted around the capital, to help concoct his collections. “I can play more of a role in the development of things [working within the UK] and we’re try to cut down the amount of carbon footprint that we are creating as much as we can. We need to celebrate what can be done in the UK.”

It’s an ethos which attracted the attention of the International Woolmark Prize, where Crutchley became the first designer to be awarded a double gong at the annual ceremony in 2019. A more recent milestone came via the V&A, where one of Crutchley’s opulent frocks was exhibited as part of the museum’s Fashioning Masculinities: The Art of Menswear show. “Honestly, it’s the highlight of my career,” he says.

These days, Crutchley is focused on advancing his brand through collaboration. “I have three coming out before the end of the year, but I want to do more. I’d love to do a trainer, to work on something that’s a little bit more casual – broadening the spectrum of who is able to buy my clothes, because my clothes are very expensive,” he says. “They’re made to the best quality that we can make in London. We don’t skimp on things to make them cheaper because what I sell are legacy clothes that you can keep forever. It would be interesting to work at other price points, in other parts of the market. And just to explore a different slant on what I do.” 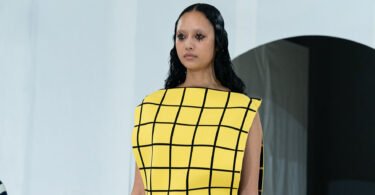 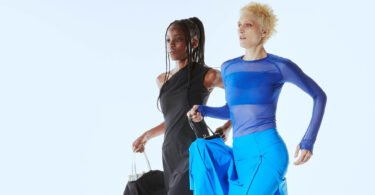 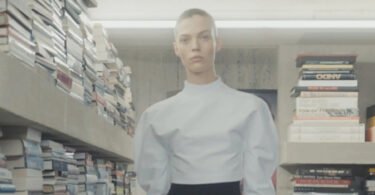